The jewel in the regions landscape crown is undoubtedly Porcupine Gorge, which stands out from its arid surrounds, with flowing creeks, towering cliffs and dense vegetation. Five hundred million years in the making and only half a day to discover, easily accessed by bitumen road this must-see attraction is approximately one hours drive north of Hughenden.

Camping: Available at the Pyramid campground 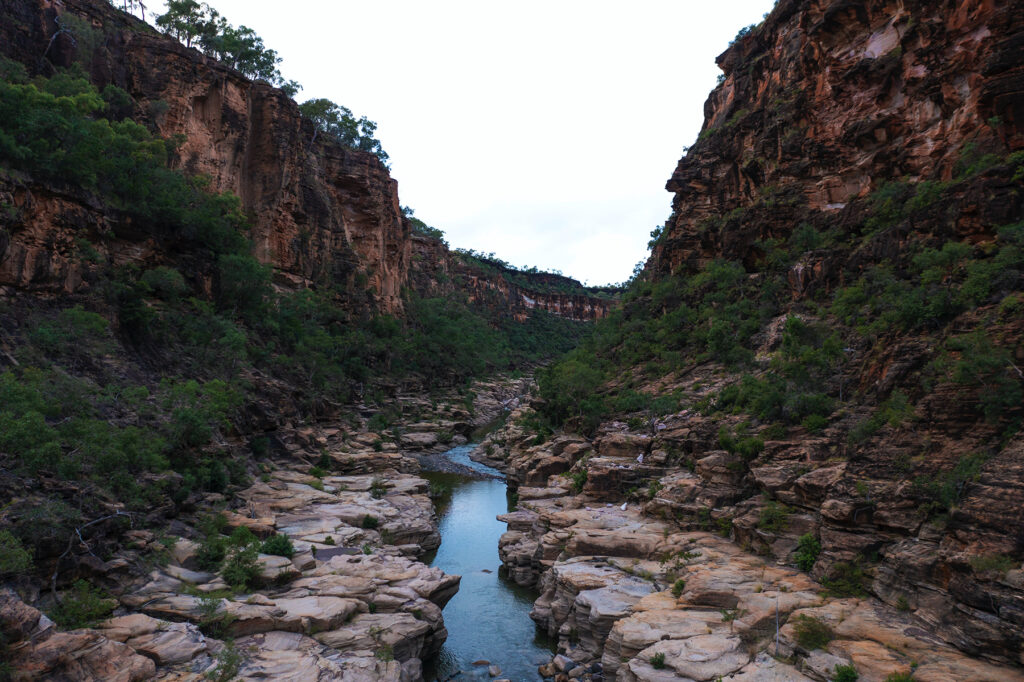 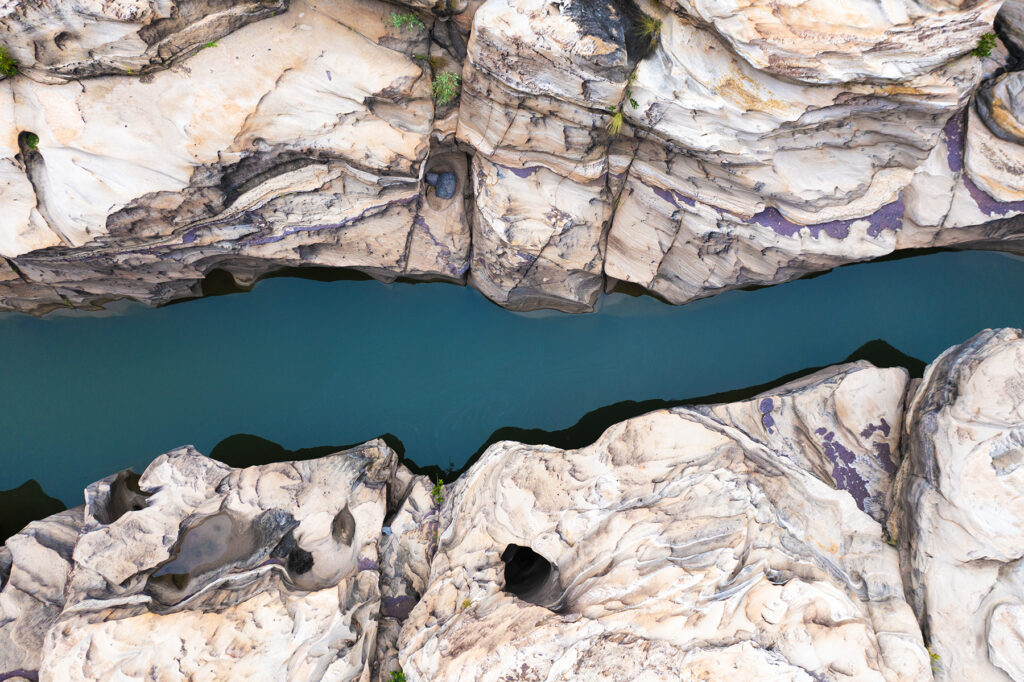 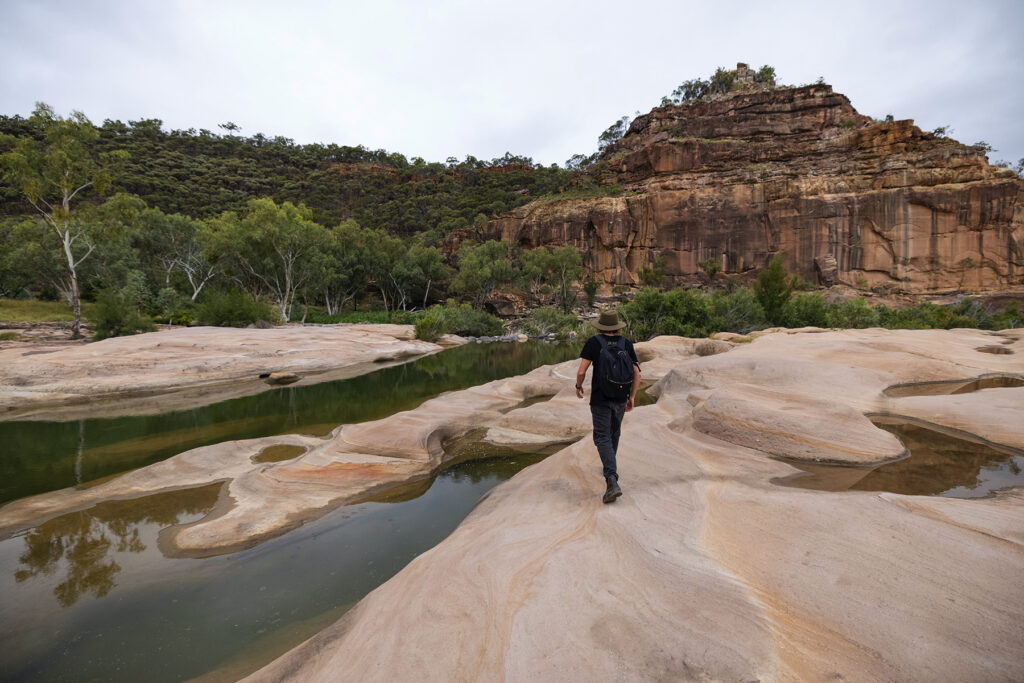 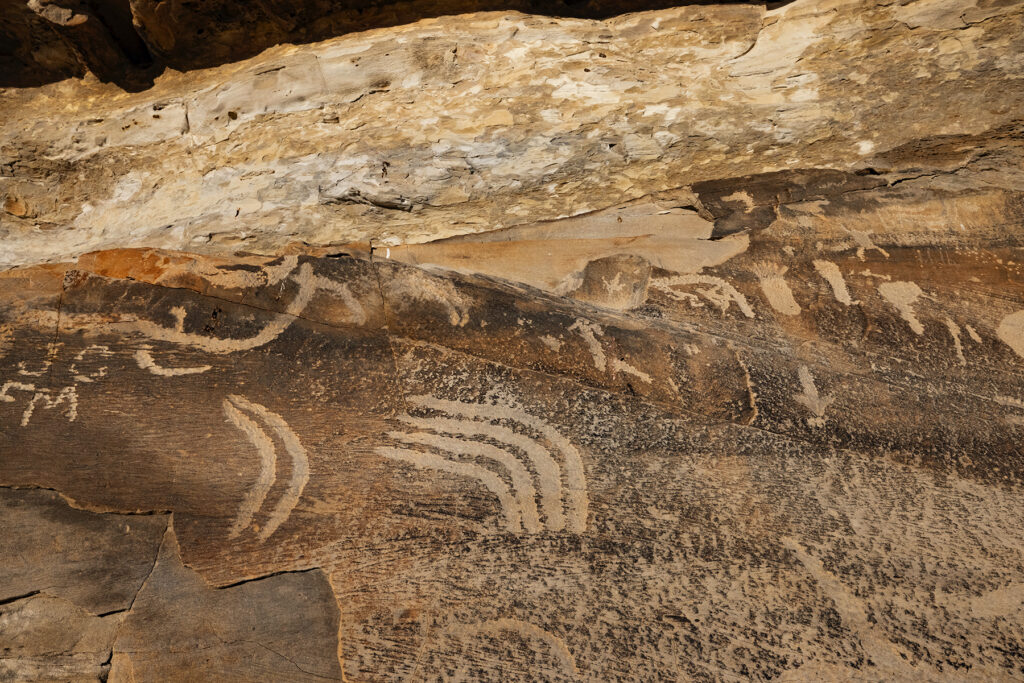 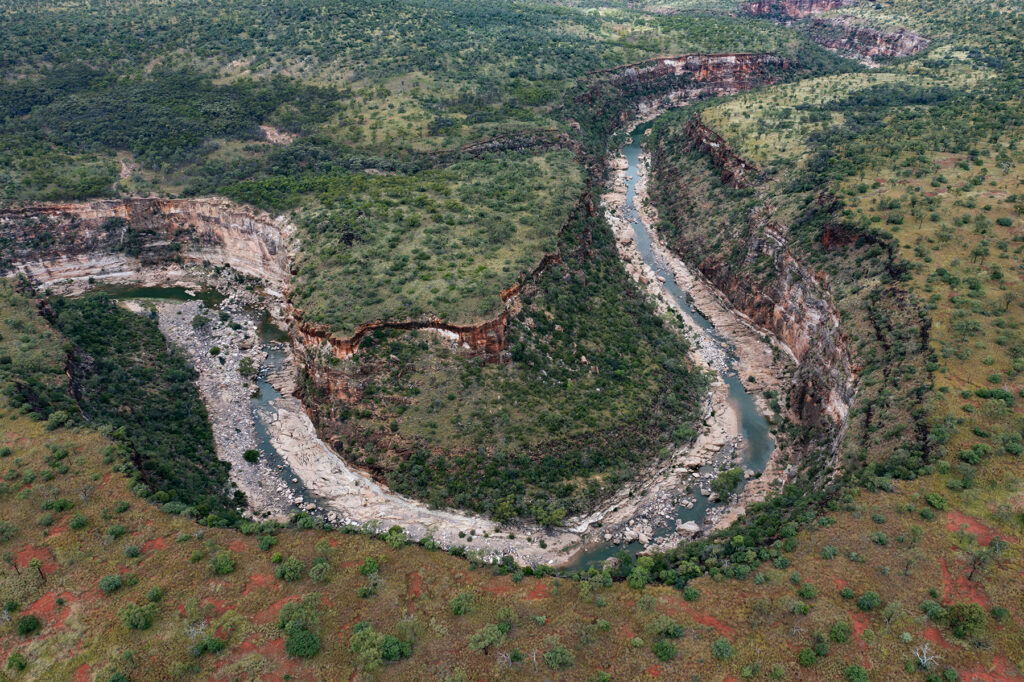 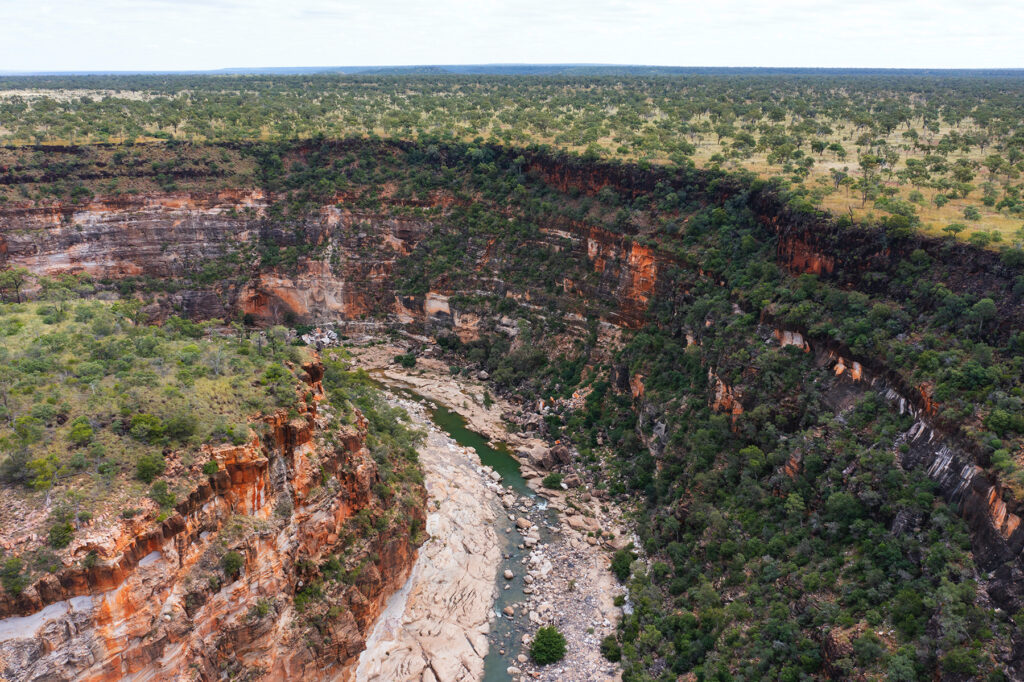 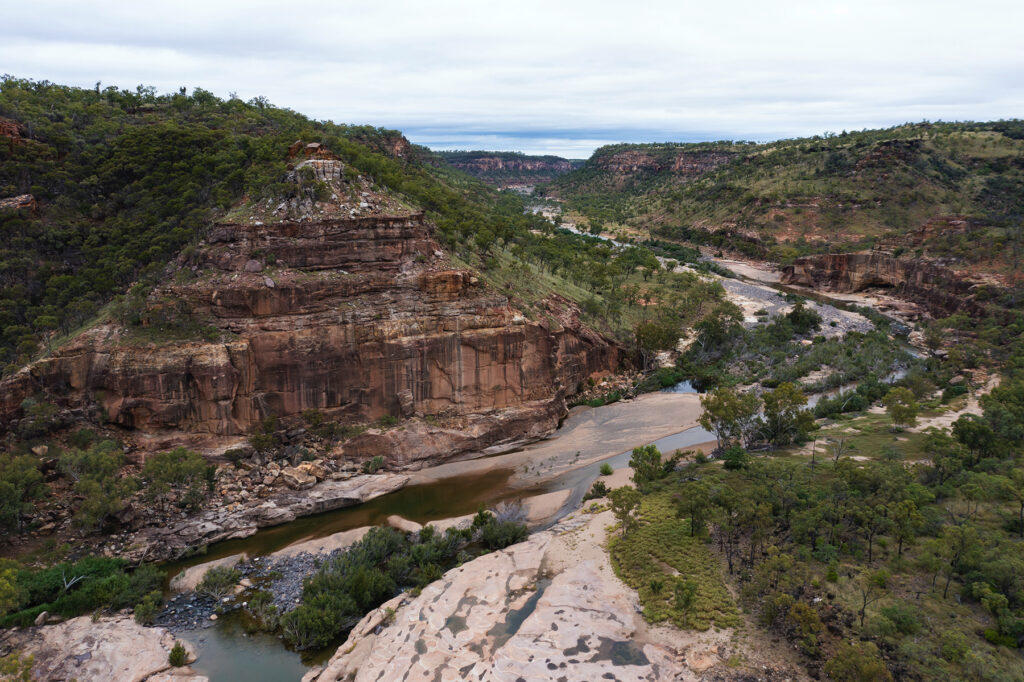 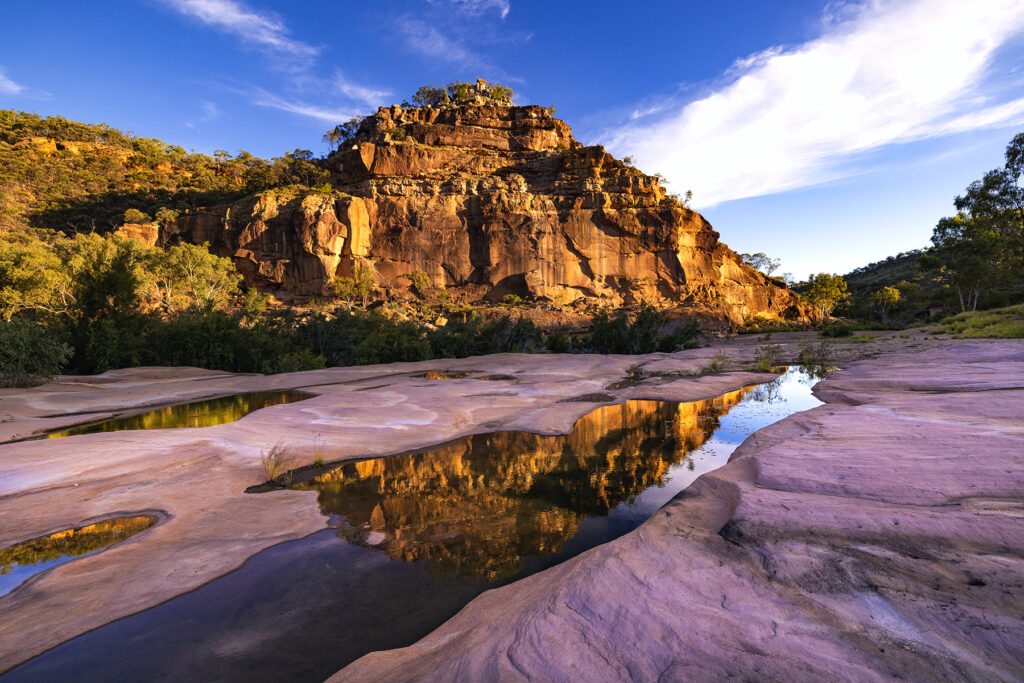 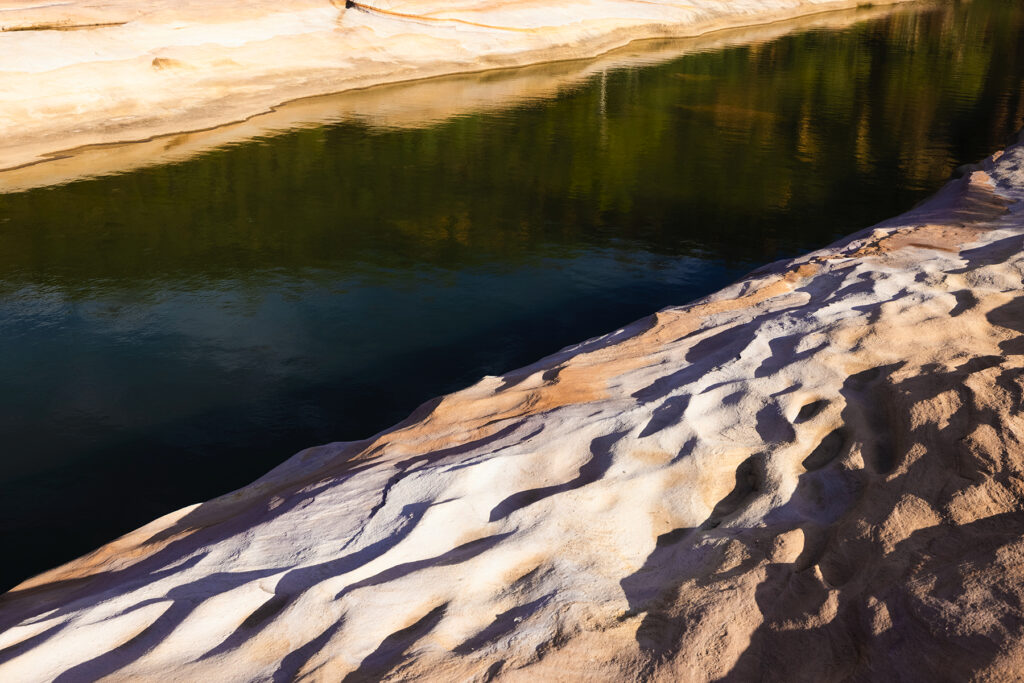 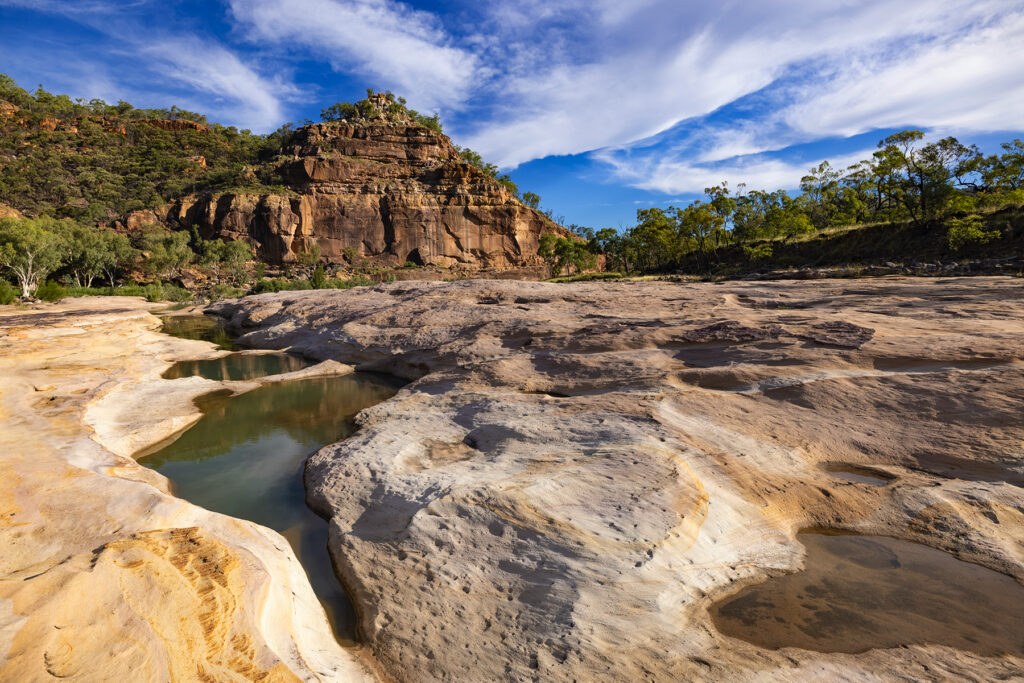 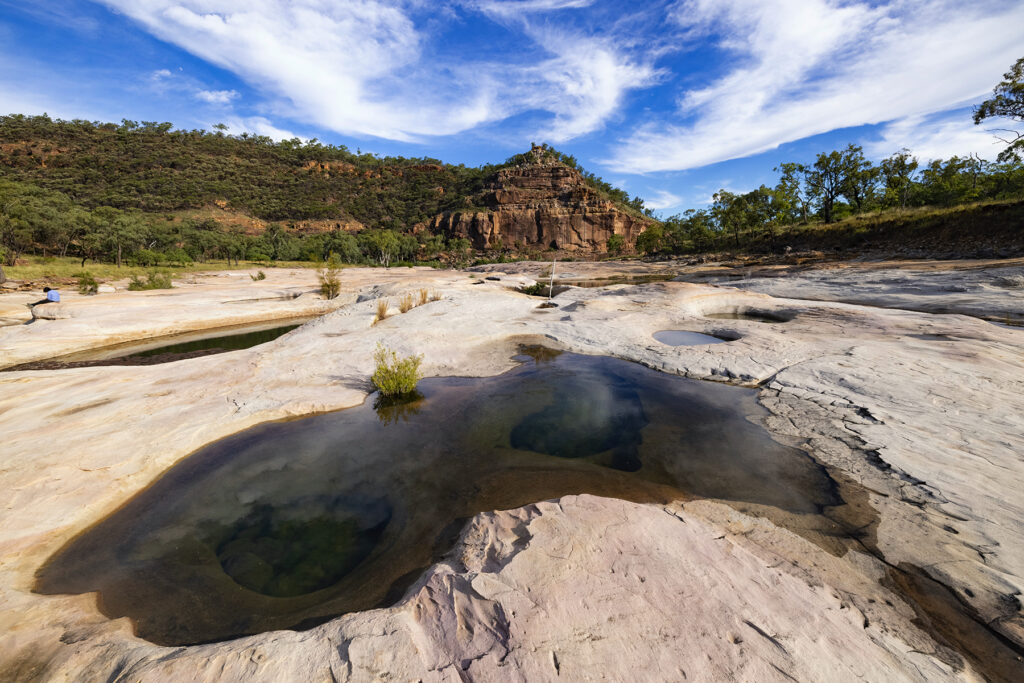 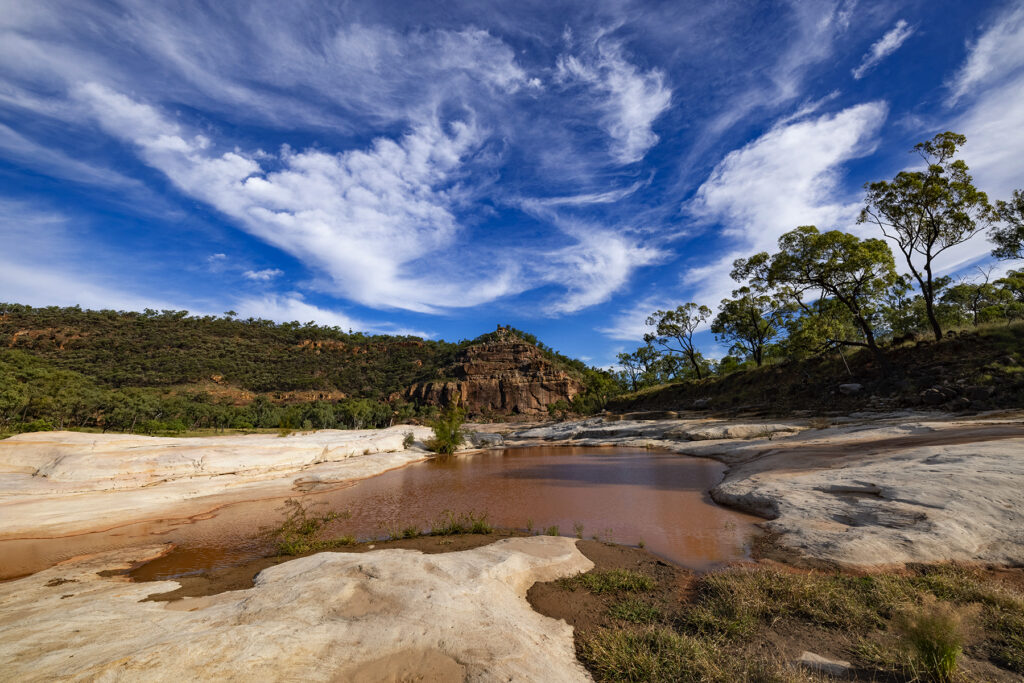 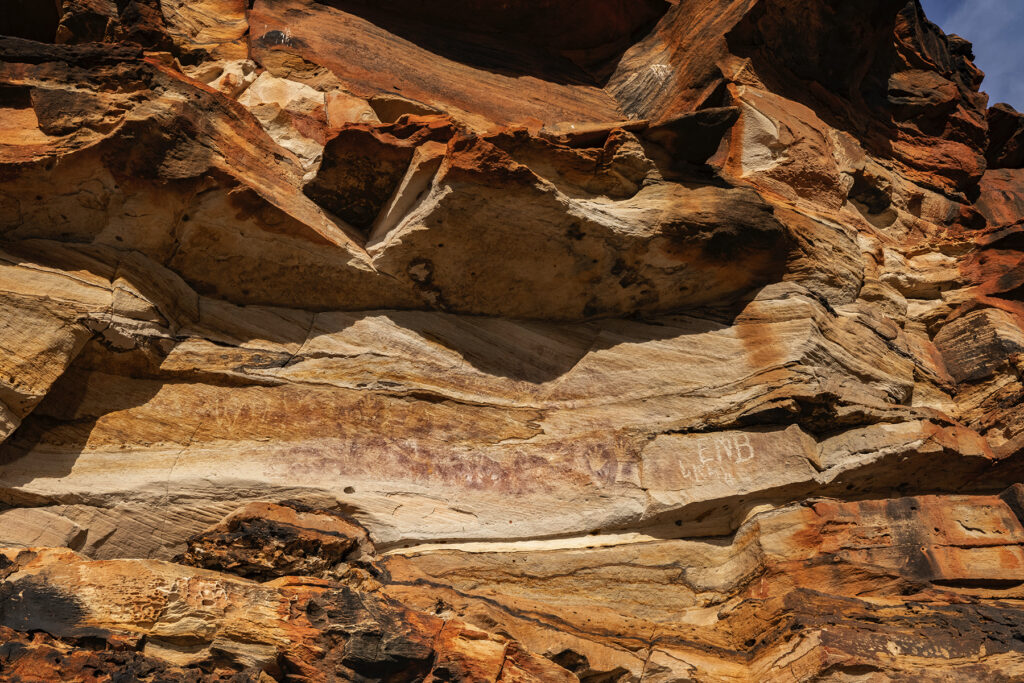 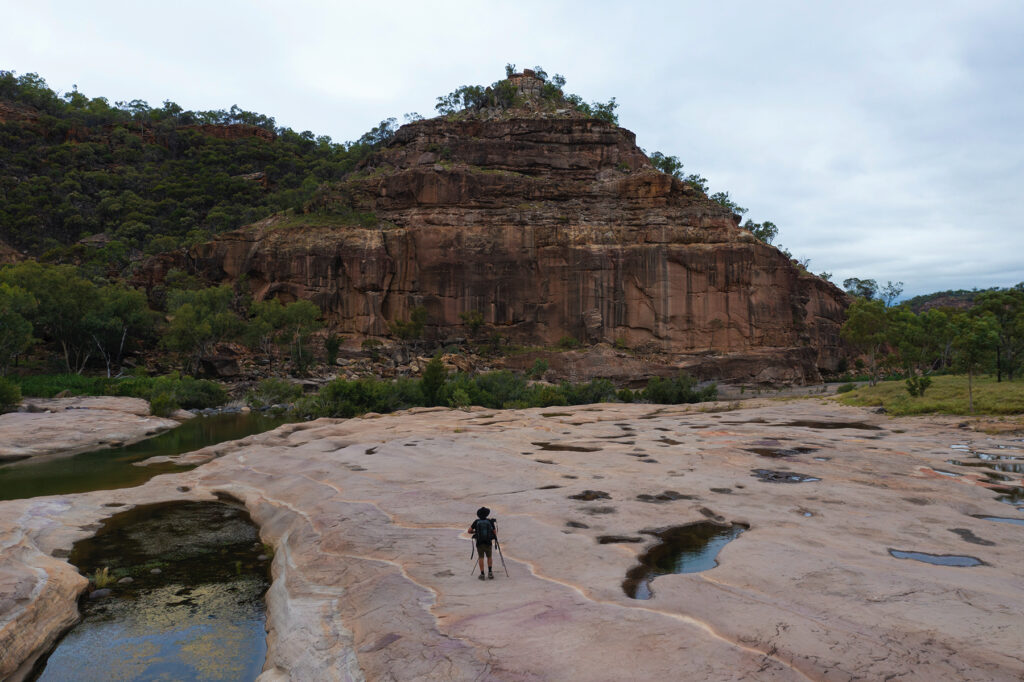 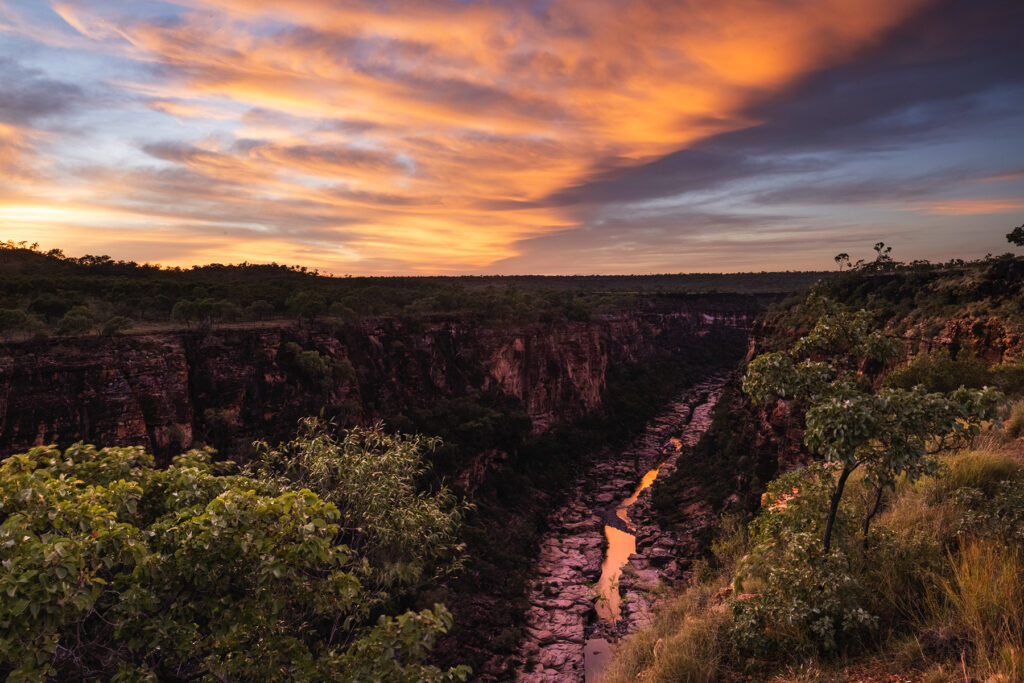 The road passes through the flat woodlands of typical Australian eucalypts and acacias and gives no hint of the existence of the gorge until the edge is reached. The gorge has been carved over time revealing layers of basalt and coloured sandstones, creating the beautiful soft colours of the cliff walls that tower over the creek below.

The Kennedy Development road to Porcupine Gorge is fully sealed. The Gorge Lookout is 63km north of Hughenden and the Pyramid Lookout, campground, Rim Walk and Gorge Walk are another 11km further north. This road could have cattle, wildlife and road trains. Please check road conditions at the Flinders Discovery Centre before travelling to Porcupine Gorge.

Covering an area of 5410ha, Porcupine Gorge National Park extends for more than 25km along Porcupine Creek, and includes surrounding open woodland and grassland. The creek has carved an impressive canyon, which reveals strata of sedimentary rocks spanning hundreds of millions of years.

Porcupine Gorge National Park and the surrounding area are a rich cultural landscape, with three traditional Aboriginal groups (the Gutjal, Jirandali and Mitjumba) continuing to maintain traditional connections to country within the park.

Porcupine Gorge National Park is a unique area of the savanna plains with a dramatic sandstone gorge cut deep into its interior. A thin, hard, basalt cap, the product of geologically recent lava flows, has in most places protected the older underlying rock, but where this capping has been worn away, the scouring action of waterborne particles has excavated a deep chasm into the softer sandstone. The “excavator” is Porcupine Creek, a meandering string of clear pools in winter and a boiling cascade in the wet season.

Wind and water have coloured and sculptured the sandstone to form fluted channels, boulders, potholes and shallow caves. Permanent deep pools, each with its resident turtles, are lined with casuarinas (sheoaks) and melaleucas (paperbacks), while various eucalypts and acacias, including the rare pink gidgee, grow in precarious positions on the cliffs above.

The gorge is filled with the calls of currawongs, parrots and the occasional soaring bird of prey. Closer observation reveals a wide variety of birds including the black duck, red-winged parrot, black bittern and numerous honeyeaters.

The gorge becomes a focal point for many animals in the dry season while others, such as the wallaroo and rock wallaby, are permanent residents.

Camping is available at the Pyramid campground, 74km north of Hughenden. Camping permits are required and fees apply. Campers should bring their own drinking water, as the water supply is unreliable.

The camping area is remote with limited facilities and no mobile phone coverage, so campers must be self-sufficent. The camping area has 22 sites in total and is often busy in the months or June and July so book ahead to avoid disappointment.

Follow the link below, by phoning 13 QGOV (13 74 68) or The Flinders Discovery Centre is an agent for National Park bookings. During holiday periods, you will need to book several weeks in advance. Please note there is no self registration available at Porcupine Gorge National Park.

Situated in the upper level of the gorge, the campground is the starting point for the 1.2 kilometre walking track which leads down into the gorge.

500m from the park entrance and 2.5km from Emu Plains Road.

Porcupine Gorge is an amazing canyon etched into the terrain by Porcupine Creek’s eroding action,
showing strata of sedimentary rocks dating back hundreds of millions of years.

Starting from the Pyramid campground, a gently descending walking track leads to the bottom of the  gorge. A flat, rocky platform provides a natural pathway down or upstream. At certain times of the  year, Porcupine Creek may not be flowing due to the lack of rain.

NOTE. In warmer months – start as early as possible as it gets very hot during the day.

Porcupine Gorge National Park is very remote and undeveloped. It is suitable for well-equipped  and experienced bushwalkers. Bushwalking can be dangerous and bushwalkers should be well  prepared for any emergency. Before overnight bushwalking within the gorge you must contact the  QPWS Reef and National Parks Information Centre and complete a bushwalking registration form  with details of your proposed trip plan and emergency contact details.

Picnic and day use areas

Sheltered picnic areas are provided at the Gorge Lookout and Pyramid campground.

The gorge, with its permanent water, attracts many animals. Some appear in the dry season while others  are permanent residents. It is a good place for birdwatching. A full bird, mammal, reptile and flora list is  available at the Flinders Discovery Centre.

Fox Helicopters run scenic flights over the Gorge which is truly best appreciated from the air. Flights can be booked online on the company’s website.

Things to know before you go

Temperatures in the gorge are noticeably cooler than on the surrounding plains and visitors are advised to  bring warm clothing, especially during the winter.

Campers should bring their own drinking water, as the water supply is unreliable.

Domestic animals are not permitted in Porcupine Gorge National Park.

∙ Ensure that vehicles (both 2WD and 4WD) and caravans (both conventional and off road camper  trailers) are in sound mechanical order. Drive according to the road conditions and your vehicle’s  capabilities.

∙ Take care around cliffs, steep slopes and rock faces along tracks and at lookouts.  ∙ Protect yourself from the sun. Wear sunscreen, a hat and a long-sleeved shirt, even on cloudy days.  ∙ Carry adequate drinking water. Treat water collected from creeks and rivers.

The Gorge Lookout has a cement path leading to the lookout but is not the correct gradient for wheel chairs,  please be extra careful on this pathway. 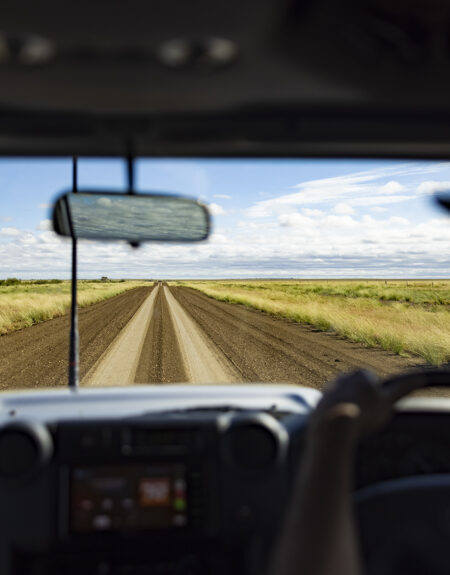 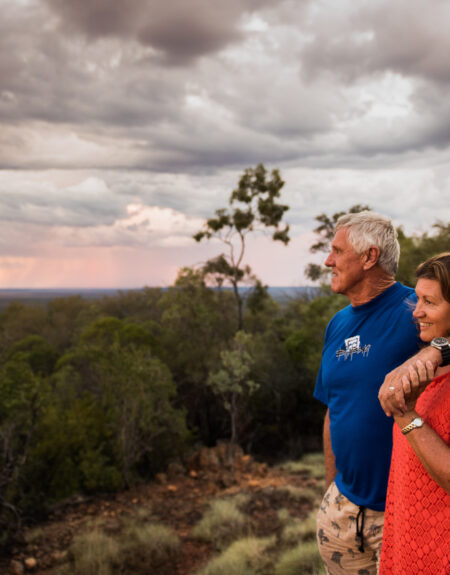